Welcome! I am not a professional MUA, but I am a certified eye shadow addict. I’m on a soft ‘no-buy’ meaning I’m not seeking out new eye shadow, but if something simply lovely comes along… In the meantime, I’m playing in my makeup, documenting and sharing it with you. I consider my looks colorful and very wearable.

If you’re a fan of makeup and Mac Cosmetics, chances are you know about its Viva Glam campaign. If not…Mac Viva Glam is typically a lip stick or lip stick and lip glass combination released annually where 100% of the selling cost goes to the Mac AIDS Fund. So go out and buy one…buy two. It’s for a good cause. 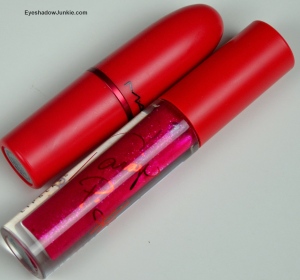 Mac has been doing this since 1994, but only a handful of the previously released Viva Glams are available. Mac Viva Glam 1 is really nice (and still available), but this year’s is quite lovely. It is fantastic bright matte fuschia lipstick and a fuschia lipglass with pink pearl. I am loving the limited edition packaging with Taraji P. Henson’s signature.

The matte lipstick is a comfortable to wear and isn’t too drying. It goes on relatively smooth and doesn’t tug at the lips during application. The lipstick is brighter than the gloss, which is intensely pigmented and can be work alone. It is a typical, sticky feeling Mac lip glass (though in larger packaging).

Mac Viva Glam’s are limited edition, but are available for most of the year it’s released.