Welcome! I am not a professional MUA, but I am a certified eye shadow addict. I’m on a soft ‘no-buy’ meaning I’m not seeking out new eye shadow, but if something simply lovely comes along… In the meantime, I’m playing in my makeup, documenting and sharing it with you. I consider my looks colorful and very wearable. 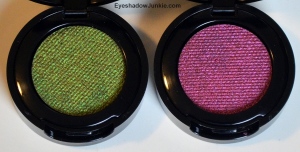 I wish there were more colors than the two Fyrinnae just released, but happiness in small doses is good too. Pressed shadows for Fyrinnae aren’t new and neither are pressed Arcanes, but this is the first time I’m trying them out. I didn’t notice any change in performance as far as intensity and coverage. I was actually impressed with the pigmentation. The swatch is done in one swipe. The powder is soft, but not crumbly and I didn’t experience any fallout during application or when blending out the edges. 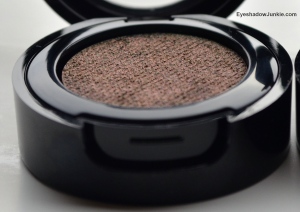 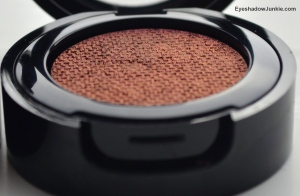 The shade is described as a vibrant green shimmer on a semi-transparent neutral base, which turns silvery to pink. This is a very pretty shade with a strong color shift. I wasn’t able to capture the pink shift in the picture, but it is very apparent when worn. It’s one of those one hit wonder shades for the eye because both the green and pink are dancing on the lid. My picture in the pan captured a pinky-brown shift as well. Complex and beautiful. Classic Fyrinnae.

The shade is described as a purple-pink, which turns a soft red, then bronze, to a golden-green. The color change is very strong as with Northwest, but I don’t see the golden-green. This shade does shift from purple, quickly through red and lands on a lovely deep bronze. Another one hit wonder. 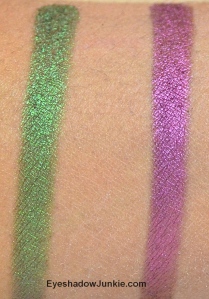 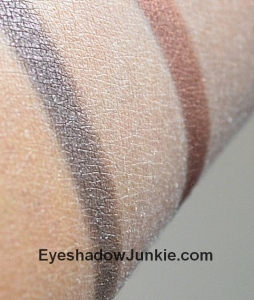 (The swatches are done over a primer.)

This is described as a multi-color sparkle in a clear base. Don’t make the same assumption I made, this isn’t a high shimmer gloss. The base isn’t a moisturizing oil either. It’s basically fine glitter suspended in a mousse-like texture. When applied on dry lips, the base feel wet and slightly slippery. Then it quickly dries down and you’re left with the glitter. While I don’t feel a glittery texture at all, I didn’t find it comfortable to wear alone. It felt like the base made my lips feel dryer. I would definitely use this product in combination with another lip product.

Fyrinnae recommends using a separate applicator when applying over other lipsticks and to apply in short vertical strokes for best results.

Fyrinnae’s Winter collection includes 5 loose shadows that I did not purchase, but check them out.